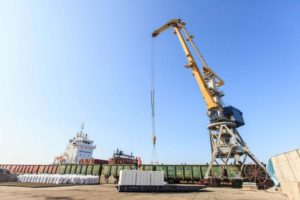 The turnover in the port of Vyborg as of October, 01 2018 reached 1 mln. 346 thousands 106 tons as a result of 9 months of operation. This is for the first time in 25 years that the port reached such results for the same period. The results of nine months is close to the absolute yearly record of 2014. The turnover in 2014 was 1 622 thousand tons of cargo. The main factor that influenced the result of 2018 was 16.8% increase in handling of export coal (784 700 tons) in comparison with the total amount of it in 2017 (672 thousand tons). The amount of transshipped mineral fertilizers and packed and non-packed general cargo also increased. The growth of transshipment is also connected to a new management approach in the port. This year the company underwent structural reorganization and introduced a motivation policy for dockers.