The Port of Vyborg reports an all-time high 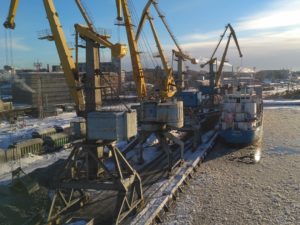 These numbers are impressive given the general drop of 0.5% in cargo turnover in the Baltic ports during the same year. It has been 25 years since the port of Vyborg demonstrated such high yearly results.

The volume of export cargo transshipped grew by 27.2%, in particular coal by 79.6%, mineral fertilizers by 12.6% and general cargo by 88% which contributed significantly to the turnover growth for 2018. Import cargo transshipment increased by 6.3% in comparison with the previous year.

The operator of the port of Vyborg is Port Logistic LTd, a stevedoring company. At the end of 2017, Olga Ansberg stepped in as general director of the company. In December the following year the company bought out the port premises from the previous owner, bankrupted Port Equipment LTd. The port operator now has plans to develop the port area and infrastructure to increase cargo turnover and quality of services.